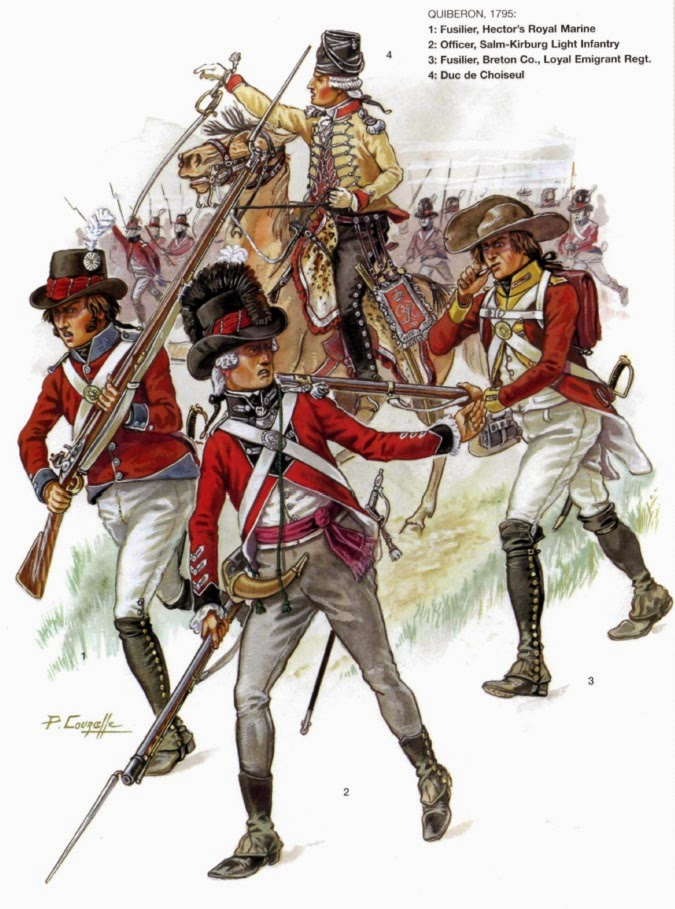 11. Fusilier, Hector's Royal Marine These former sailors of the French Royal navy wore a red coatee with iron grey collar, cuffs, turnbacks and shoulder straps, white piping and pewter buttons stamped '2', over a white waistcoat and breeches with black gaiters. The black round hat was furnished with a red turban and white cockade, loop and plume. Officers had gold buttons, epaulettes and belt-plates; the men's oval brass belt-plates bore the legend 'Hector' above a fleur-de-lis.

22. Officer, Salm-Kirburg Light Infantry Only 18 members of this unit escaped from Quiberon at the end of this catastrophic campaign, to be absorbed by the Loyal Emigrant regiment. Officers wore a scarlet coatee with scarlet collar, black cuffs and turnbacks, silver lace at sleeve buttonholes and silver buttons. See illustration elsewhere in this book for their men's dress.

33. Fusilier, Breton Company, Loyal Emigrant Raised locally after the landing and fighting with the rebel chouans of the Vendée from 1795 until at least the end of 1799, the company wore the wide-brimmed Breton hat rather than uniform headgear.

44. The Duc de Choiseul The duke was the commander of this ill-fated expedition. Having lost his baggage, he wore a campaign version of the uniform of the Salm Hussars - featuring a buff coatee with red collar and silver lace - lent to him by officers of the regiment.

Ill-fated British attempt to initiate a counterrevolutionary uprising in Brittany in 1795. A force of several thousand armed émigrés was landed by a British fleet, with the hope that Chouan revolutionaries would join them. The expedition was hampered by a divided command and was quickly defeated by local forces under General Louis Lazare Hoche.

By the spring of 1795 Allied operations in Flanders had collapsed and French Revolutionary armies were on the offensive. The British government, led by William Pitt, hoped to land an émigré army in Brittany, near the Vendée, to spur a general uprising. Joseph, comte de Puisaye, who had led a guerrilla force and fled France in 1794, had been trying to gain support for such an attack for some time. An expedition was prepared using British-funded French regiments as a landing force. Command was divided between Puisaye and Louis Charles, comte d’Hervilly, an experienced soldier.

An expedition under Commodore Sir John Warren left Portsmouth in mid-June 1795. Nearly 100 transports carried more than 3,000 émigré troops and 80 guns, escorted by 3 ships of the line and 10 frigates. The fleet sailed into Quiberon Bay, in western Brittany, on 25 June. A suitable landing spot was located, and the troops and supplies were disembarked on the twenty-seventh. There was little resistance from the local militia, and several thousand Chouan rebels quickly rallied to Puisaye’s colors. D’Hervilly led an army of 12,000 men, including many untrained local peasants, to attack Penthièvre, the only fortification on the Quiberon peninsula.

They quickly captured it, but d’Hervilly refused to advance farther. By not doing so, he allowed Hoche to seal off the peninsula. Weaknesses in the expedition quickly came to light. Puisaye and d’Hervilly were at odds over who would command. Also, many of the émigré troops were French prisoners of war, who volunteered in England to get out of prison ships. When they returned to France, they quickly deserted. Hoche’s defenses cut off the flow of new recruits to the army. Had the expedition come earlier, when counterrevolution was stronger in Brittany, the results might have been different. Unfortunately for the royalist cause, it had been largely suppressed by the time the landing at Quiberon took place.

D’Hervilly attempted to break out of Quiberon by making amphibious landings behind the flanks of Hoche’s defenses on 11 July. He led the southern wing of the attackers in an assault against 3,000 men holding a fortified position on 16 July. Hidden French artillery opened up, killing d’Hervilly and routing the assailants. The northern wing marched on St. Malo, but was intercepted by republican troops and dispersed.

Emigré reinforcements arrived at Quiberon on 15 July, but by then the expedition was foundering. Hoche followed up his defensive successes by an attack on Penthièvre. Deserters among the émigrés took control of the fort and surrendered it on the night of 20–21 July. Hoche immediately attacked the remaining field force of royalists, who collapsed and were routed to the beaches. British frigates were delayed by a gale and managed to take off only 2,000 royalists of a force that had totaled 17,000. Hoche also captured equipment to supply 40,000 troops, intended for Chouans expected to join the expedition.

Despite promises of mercy, the republicans executed more than 700 émigrés captured in the abortive invasion. The defeat helped end the threat of counterrevolution in western France and prevented other uses of émigré troops by the British.

Email ThisBlogThis!Share to TwitterShare to FacebookShare to Pinterest
Labels: Battles