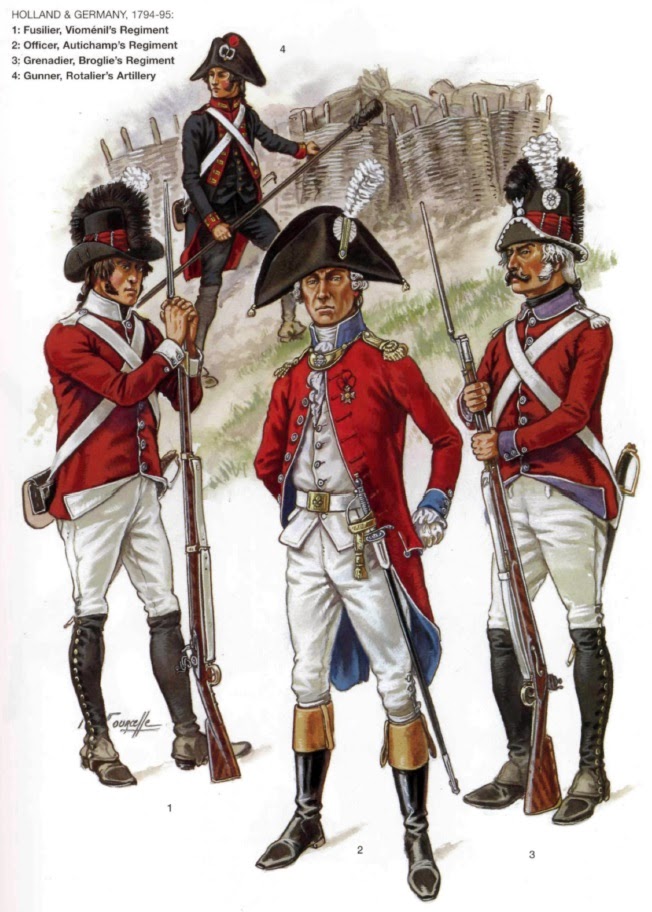 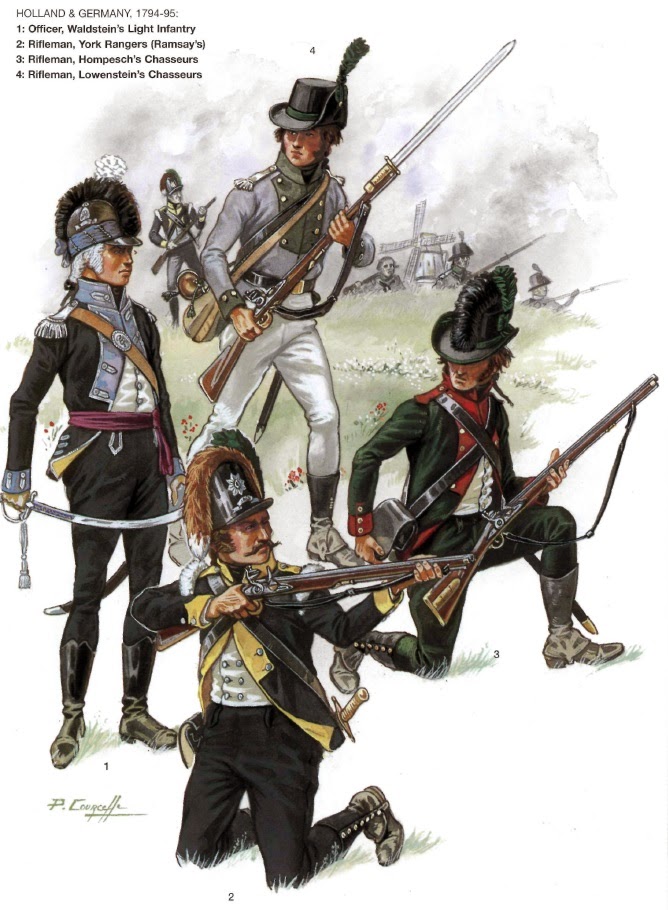 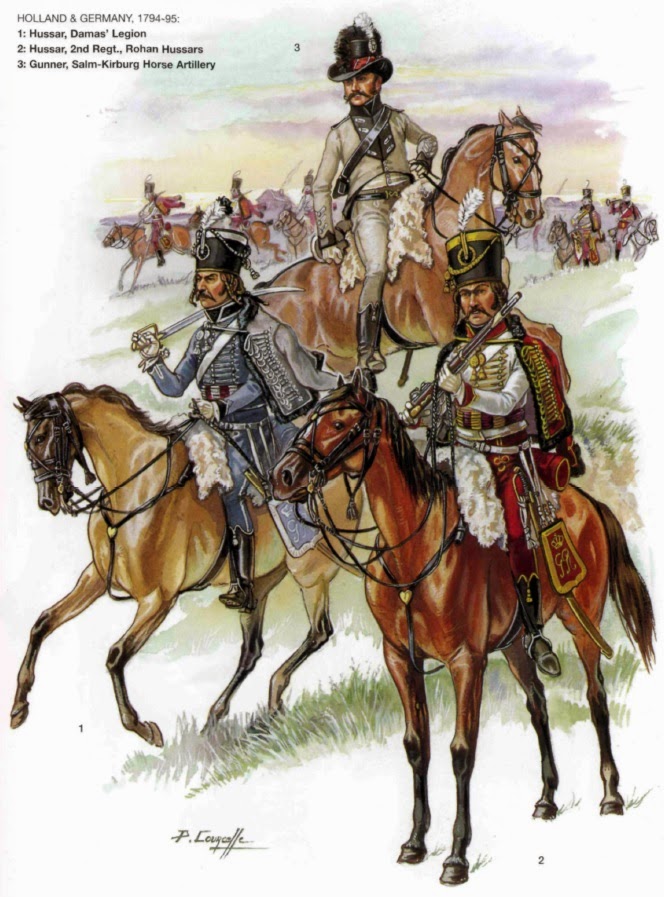 The army was formed by Louis Joseph de Bourbon, Prince of Condé, Prince du Sang, Grand Master of Royal Household. He had served with distinction as a French officer in the Seven Years War alongside his father the Prince of Sourbise and was a General in the French Army at the time of the revolution in France.

Condé had decided to escape from France following the fall of the Bastille in 1789 and fled across the border with his son and grandson, for fear of possible arrest or death.
In 1791, along with many other royalist French refugee’s the prince established himself at Coblenz. Here he helped to organize and lead a large counter-revolutionary army of émigrés.

Composition of the army
Originally about 25,000 men, the size of the prince's army varied, depending in great part upon the demands placed upon it, but also on the funding available. By the end of 1792, the force had 5,000 men. After recruiting in 1796, in the cities of Mainz and Mannheim, and in the Swiss cantons, it could call on 10,000 men, under the pay of Britain.

The composition of the army also varied: The regiments of Mirabeau, Rohan and Salms, for example, were almost independent corps.

Other than the Prince, the Army of Condé contained the prince's grandson, the Duc d'Enghien, and the two sons of his cousin, the dead king's brother, the Comte d'Artois. It also included many young aristocrats such as Duc de Richelieu, the Duc de Blacas and Chateaubriand, the Duc de Choiseul, the Comte de Langéron, the Comte de Damas, the Comte de Montlosier and the Vicomte de Bonald. Some of whom would eventually become leaders during the Bourbon Restoration.

The insistence of these former high ranking officers in the French Army on receiving the same rate of pay to which they were entitled in France created problems for their funders, which included Spain, Portugal, and Naples, and Britain, and finally, Russia.

The Noble Regiment for example was commanded by Condé himself drawing a French General’s salary, whilst many of its companies were also commanded by Generals being paid at the same rate as if they commanded a whole army. Although in fairness to them this would probably have fallen far short of supporting them in the manner to which they and their families were accustomed given that they had lost all the income from their estates and possessions in France, and is probably no less that a modern day industrialist would expect if asked to help form and manage a new venture by the government.

History and operations
The Army of Condé initially fought in conjunction with the Austrians. Although many of the generals in Habsburg service distrusted Condé and policy makers in Vienna considered the army and its officers unreliable. Furthermore, the conflicting goals of the French royalists and the Habsburgs frequently placed Condé at odds with the Habsburg military leadership.
At one disagreements over the conduct of war became so heated that the Austrian Emperor ordered Condé to be arrested for insubordination, and in 1792, he demanded the immediate dissolution of the army on the grounds that its officers were émigrés were so incompetent, so unrealistic, and the army so mismanaged that the it was nothing but a liability to the campaign in Flanders.

In 1794, the disagreements with Austrian’s became so debilitating that Condé through the negotiations of William Wickham, secured an alternative funding arrangement directly with the British government to pay the Corps' expenses. The British continued to pay to maintain the Condé’s army from 1795 to 1797, allowing him much more freedom to operate independent to the Austrian’s if he wished.

However, in 1797, Austria signed the Treaty of Campo Formio with the First French Republic, formally ending its hostilities against the French, and with the loss of its closest allies, the army transferred to the service of the Russian tsar, Paul I and was withdrawn to Poland. However, it returned to the Rhine in 1799 as part of Alexander Suvorov’s Russian Army.

When Russia quit the Allied coalition in 1801, the Condé once again negotiated the transfer of his army to British service after which it fought in Bavaria.

Over the course of its existence the army took part in the following battles and expeditions:
Battle of Wissembourg (1793)
Battle for Haguenau
Battle of Bertsheim
Siege of Maastricht (1793)
Battle of Toulon (1793)
Landing of emigrants at Quiberon
Battle of Biberach (1796)

The end of the army.
On the 7th March 1800 the Armée de Condé was transferred from Russian into British service.
It was initially planned for it to participate in an expedition into the Languedoc, and on the 16 April the army was marched from Linz to Italy. However, upon reaching Pordenone on the 9th May, they learn that the plans had changed and that the Army was to remain at Pordenone to await further orders.

Eventually orders arrived that the army was to march north again, to reinforce the Austrian Army which was retreating from Ulm. On the 12th June it went into cantonments around Salzburg and remained there until the 5th July, on which date the army was ordered to move Rosenheim to defend the Inn river.

At Rosenhiem that army was involved in some outpost fighting with the French but avoided the main battle which took place on the 3rd December at Hohenlinden where the Austrians were defeated. Joining the Austrian retreat on the 9th December, they are finally cantoned in Windisch-Feistritz where they remained until after the hostilities had ended and the Austrian’s sued for peace.

They were still cantoned at Windisch-Feistritz when they received an order to hand over all of their horses (presumably to the Austrians), further learning that with a peace now established, there was no further use for them on the continent. This had a very bad effect on morale, resulting in the defection of seventy fully equipped dragoons to the French Army.

Next, a rumour spread through the camp that the British government planned the use of the army in Egypt. As a result, of this news all but around 250 of the officers and nobles in the army immediately resigned their commissions. At about the same time British offered the enlisted men a chance to transfer the ‘Roverea’ regiment, which was a Swiss regiment also in British service, but only 28 men accepted.

Finally, a deal was struck whereby the British promised to allow the men to continue to serve in their current companies under their former officers of the Armée de Condé, and guaranteed that they would only be required to serve in Europe, the Mediterranean and Egypt. About 600 men accepted this deal and signed up for further service, the remainder receiving a gratuity based on their rank.

Those that remained were combined into a single battalion with the name Chasseurs Britanniques.
Posted by Mitch Williamson at 5:51 PM