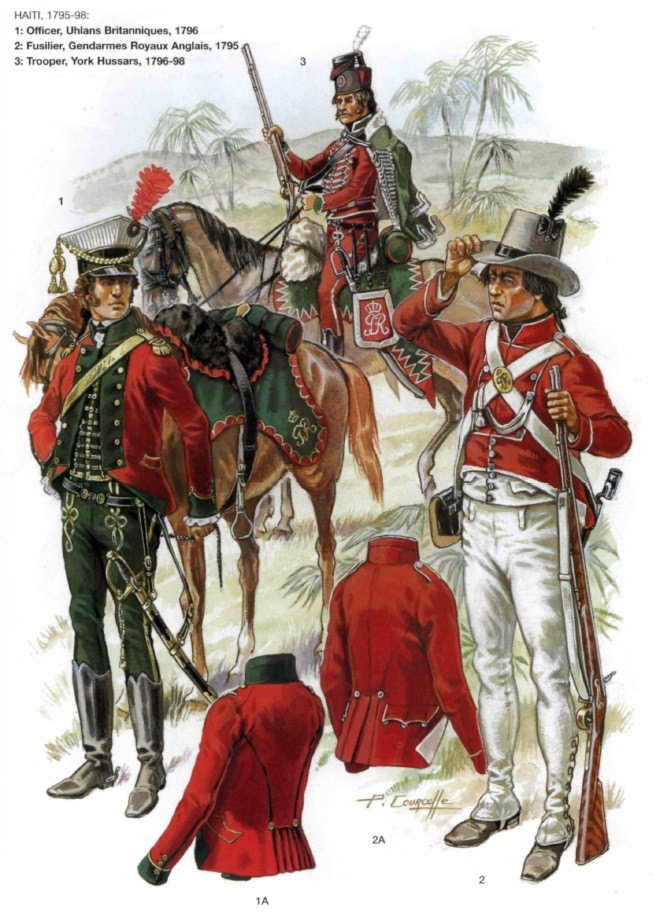 After a farcical show trial King Louis XVI was executed on 21 January 1793. The infant French Republic, already fighting Prussia and Austria and scenting a European conspiracy, declared war on Britain and Holland on 1 February 1793.

By that time great numbers of French noble families and non-noble Royalists had already taken refuge in neighbouring countries. They numbered about a quarter of a million souls of both sexes and all ages - almost one per cent of the French population. These exiles became known collectively as the 'émigrés'.

Great Britain at first reacted somewhat slowly to the effects of the French Revolution. While Royalists were fighting for their own communities in the Vendée, and émigrés with the Dutch forces in Flanders, British policy on the subsidising, enlistment or employment of foreign troops was confused. A parliamentary bill 'to enable subjects of France to enlist as soldiers' and receive commissions without suffering 'pain or penalty' for professing 'the Popish Religion' was finally passed in April 1794. This removed the last legal hurdles to raising units. For instance, eight so-called 'white cockade' infantry regiments - each to have 1,657 officers and men in two battalions - were authorised on 1 August 1794; and a 990-man battalion of artillery in November, as well as other corps. By that date, however, the numbers of émigré Royalist recruits were dwindling, and some of these regiments could not be raised.

French Republican armies overran Holland at the end of 1794, and British forces present retreated into Hanover. At that point many émigré and foreign units in Dutch pay were transferred to the British service. In July 1795 came an attempt on the French coast which ended disastrously at Quiberon. This was a catastrophe both for Britain's émigré regiments and for the remaining chouans - the insurgents in western France - who were much discouraged despite continuing British aid in arms and money.

By then France had invaded most of its European enemies, forcing them into neutrality or - like Holland and Spain - armed alliance against Great Britain. Many French émigrés in British service, especially officers, dispersed among numerous units in Europe and overseas. German units were partly absorbed into the 60th Foot in 1797-1798. However, in 1799 many Swiss and Dutch units were added so that the foreign establishment remained sizeable. The remnants of the Prince of Condé's army, abandoned by Russia, was subsidised by Britain in northern Italy. In the Vendee organised Royalist forces took up arms again with British material support.
Posted by Mitch Williamson at 5:56 PM